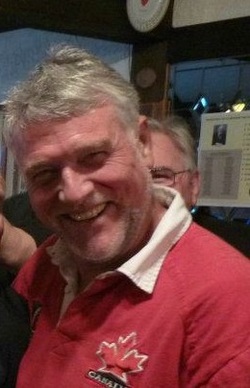 Jack had a blast buying beer for the troops and celebrating his Birthday milestone with his mates!!
The day was best summed up by Nick (the Snowcaps Captain) as “A perfect day for rugby….COLD,
WET and MISERABLE”. Yes, it was all of the above which made it even better
for those smart enough to know…….. it’s still the best way to spend a Sunday
afternoon!!

The Snowcaps ran out winners with a scoreline of 5 tries to our 1. Our try coming from Brian (Houle), who found himself in the right place at the right time – standing (yes, standing) on
the goalline (yes, goalline), being handed the ball (yes, handed) and touching the post. Wow, how does he do it?

Overall it was an excellent game of rugby. We didn’t have a full team, so we had to borrow a few players from the ‘Caps. Not a nice thing to admit for a home game. Come on fellow
Evergreens, we need better numbers, at the very least for home games!!
The final score does not reflect that the Evergreens had most of the possession but
we could not make the final breakthrough and were caught by the ‘Caps breakaways.

Thanks to Dave and the Rev  from Legends for showing.   Zak as you’re now a regular, we’ll just
have to stop singling you out for praise and start dumping on you just like the
rest of the guys.  Kudos to Blair and try scorer Brian for making it over from the Sunshine Coast.  JR
we miss ya – IT’S PRETTY QUIET WITHOUT YOU!!

Bill put on quite the  amazing post-game meal.  Roast beef no less!! There was a terrific buzz in the clubhouse and we had more visitors show up to celebrate Jack Stokes 60th birthday.  A full house no less!

By the way, congratulations also to our newest Evergreen, Sonny. He welcomed a bouncing baby daughter into
the world just last week. Yes, he was looking a little red-eyed on Sunday!!  Congratulations to you and your family from all of us!!
This week-end coming up we are combining with the Legends at Connaught Park playing the Abotsford
Origionals.  So come on out players and  let’s have some more fun in the muck!!